The WorldSkills competition, designed to test the entrant’s skills against national training standards, are completed over a 6 hour timeframe.  In the Cabinet Making competition, the competitors put together a spice cabinet with a dovetail drawer from supplied plans.  The Cabinet Making competition tests the competitors ability to read and work to plans, job plan and skillfully produce and finish a piece of quality furniture; within the 6 hour timeframe.

Craig’s win in the Canberra Region WorldSkills follows on from his 2014 achievements.  In 2014 Craig won the FIAA NSW/ACT Apprentice of the Year Award as well as the John Tiddy Memorial Award for his 3rd year furniture piece.

Craig is highly skilled and has a bright future ahead of him as a cabinet maker.  Well done Craig and all the best for the WorldSkills Nationals in Melbourne in 2016. 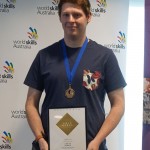